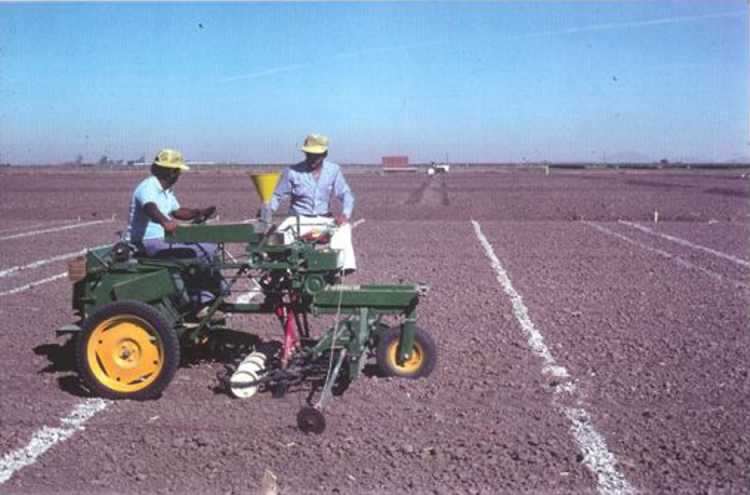 1961: Norway was the first country in the world which started to use the world’s first multi-rows batch type plot seeders which were produced in series. The Øyjord plot seeders were designed for plant breeding of cereals and other crops and multiplied the capacity of sowing of plots. The seeders were also perfect for variety trials.

Between 1961 and 1976, Øyjord batch type plot seeders for plant breeding and variety trials were exported from Norway to 57 countries all over the world. Orders came from all continents, and the buyers expressed their satisfaction with the capacity and precision of the Øyjord plot seeders.

In the period 1974-76, Mr. Jens A. Schou decided to close his factory and move to Florida. During this period Egil  Øyjord transferred the right of production of his seeders to the Wintersteiger Company in Austria and Hans-Ulrich Hege in Germany.

In 2001, the Wintersteiger Company reported that they had sold 5000 units of the Øyjord batch type plot seeders since they took over the production in 1974-76.

In 2017, Dr. Vladislav Minin, Director of the Russian Branch of IAMFE, reported that several thousands of the Øyjord batch type plot seeders had been made in Russia since 1967 when the Soviet Union purchased 20 Øyjord plot seeders from Jens A. Schou Mek. Verksted, Norway.

A report from 2015 shows that Øyjord batch type plot seeders are in use in more than 130 countries in the world.

In 2017, The International Association on Mechanization of Field Experiments (IAMFE) by IAMFE President, Prof. Shang Shuqi and Executive Secretary Prof. Wang Jiasheng, nominated Professor Egil Øyjord for the World Food Prize for his contribution to increased food production in the world by the increased capacity of cereal breeding by the Øyjord plot seeders. Prof. Song Xijun, President of Qingdao Agricultural University, supported this nomination.  The proposal was also supported by President Vladimir Popov and Executive Director, Dr. Vladislav Minin of “The Russian Branch of IAMFE” and Mr. Jon Mjærum, President of “The Norwegian  Branch of IAMFE”  and Dr. Hans-Joachim Braun, Director of Global Wheat Program, CIMMYT, Mexico.

The winner of the Nobel Peace Prize 1970. Dr. Norman E. Borlaug who established this prize called it: “The Nobel Prize in Agriculture”.

The winner of this award for 2017 was Dr. Akinwumi Ayodeji Adesina, President of the African Development Bank (AfDB) and Minister of Agriculture in Nigeria 2011-2015.

It is a great honor to be among those who have been nominated for the “World Food Prize”.